A SCOTS environmental organisation has warned of the impending death of the world’s oceans – unless drastic action is taken to stop pollution and plastic waste being dumped in our seas. Edinburgh-based Global Oceanic Environmental Survey (GOES) Foundation fears the entire marine ecosystem could collapse within the next 25 years and the only way to avoid planetary disaster is to effect change now.

Dr Howard Dryden, the charity’s chief scientific officer, admitted his cataclysmic prediction was hard to believe but insisted that hundreds of millions of people could starve after toxic chemicals kill all sea life. He is now appealing for sailors to collect plankton samples from around the globe, especially in the high and low latitudes, to produce evidence to back his claims and create a database of the “state of the oceans”. A new report from the foundation predicts that numbers of whales, seals and seabirds will begin to crash over the next seven years.

By 2030, 90 per cent of the world’s coral will be dead and a quarter of the remaining fish in the oceans will no longer be able reproduce.

Fifteen years after that, unless drastic action is taken, acidity levels will have increased so massively they will trigger a “cascade collapse” of ocean ecosystem with most fish, birds and sea mammals wiped out within five years.

This will spark the failure of terrestrial ecosystems and very possibly the end of life on Earth as we know it.

Although it sounds far-fetched, the prediction echoes the recent warning from Sir David Attenborough that the “collapse of our civilisations and the extinction of much of the natural world is on the horizon”. 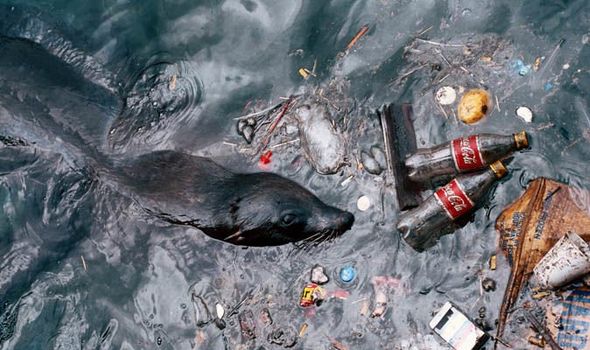 Pollution is destroying our oceans and planet (Image: NC)

Dr Dryden said: “We all talk about climate change and how we need to cut back on emissions to save the planet, but that will not address the problem quickly enough or even tackle the root cause of our climate crisis.

“We need to stop using plastic or allowing it or other chemical pollutants to enter the ecosystem.

“We only have around 10 years to effect change and eliminate not only plastic but priority toxic chemicals such as oxybenzone used in thousands of products from lipstick to sunscreen. If we do not achieve this task, then there will be a trophic cascade collapse of the entire marine ecosystem.

“We’ve already seen 80 large whales washed ashore in Scotland this year. The chances are there were several hundred that were not discovered.

“If we allow the marine ecosystem to be destroyed, the terrestrial ecosystem will also fail a few years later.

“I find it hard believe this is actually happening, but it is a reality, and within the next 25 years we could lose the food supply for almost two million people and have runaway climate change.”

Dr Dryden, a marine biologist who founded the charity after setting up his own water filtration company, Dryden Aqua, said this dire outcome could still be avoided.

The GOES Foundation provides kits for oceangoing yachts to collect samples of plankton, the tiny, aquatic organisms that are in danger of being wiped out by pollution.

He said much of the most dangerous pollution in the oceans did not come from industries but from ordinary people who use cosmetics and other products laden with chemicals.

These include oxybenzone, which does not dissolve in water but attaches itself to smaller particles such as plankton, slowly killing them off and poisoning other organisms that feed on them.

Samples from the deepest parts of the world’s oceans have already been found to contain a “concentration” of the toxic chemical.

Dr Dryden is also calling for all wood burning to be stopped by 2020 with global protections implemented to reduce forest fires while “as many trees as possible” are planted.

Other initiatives include a total ban on single-use plastic, pollution-free recycling of electronics and by 2030 all industries to be zero toxic discharge.

Dr Dryden also says there needs to be special protection and perservation of peat bogs, wetlands, marshlands and mangrove swamps to ensure carbon dioxide is absorbed from the atmosphere.

From that point on, he said oceans will start to recover to healthy levels by 2050.

Dr Dryden said: “We have the next 10 years to get systems into place and stop polluting our environment. Failure to achieve this task is not an option. It’s not just about saving whales and dolphins – we cannot survive if we keep poisoning them.

“If we don’t address this, they will become too acidic and we’ll witness a cascade failure of the wider planetary ecosystem. Terrestrial life on earth will become impossible unless you have an oxygen tank on your back. At the current rates of decline, we will reach this tipping point any time in the next 25 years.

“I wish I could find a scientist who could counter argue my claim but, unfortunately, they all agree with me and I have raised this at both UK and United Nations level. 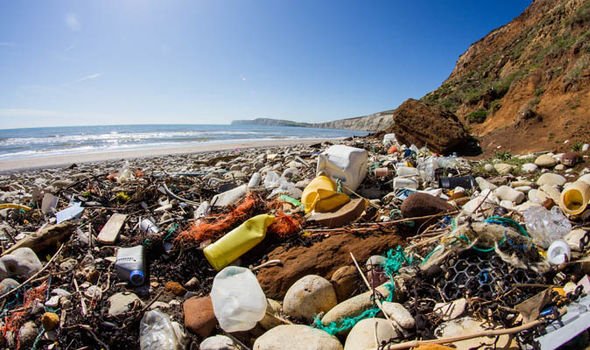 Experts have warned plastic pollution could cause the death of the ocean (Image: GETTY)

“To put it bluntly, if we do nothing to rectify the situation, we’re all stuffed.”

A spokesman for the UK’s Department for Environment, Food and Rural Affairs, which has been working with Dr Dryden, said: “Our seas and oceans are some of our most precious landscapes, and it is vital we manage them in a more sustainable way for future generations, making water cleaner and helping to create richer habitats for marine life.”

He added that oxybenzone “is subject to ongoing investigations under the EU chemical registration process, to which the UK is party, following concerns about exposure to the environment, its widespread use and its potential ability to disrupt the normal functioning of the hormone system”.

Earlier this year, Hawaii became the first US state to take action on sunscreens containing oxybenzone and octinoxate, with a ban due to come into place in January 2021.

Plankton provide more than 70 per cent of our oxygen and remove most of our carbon dioxide.

According to Dr Dryden, if we had not killed more than half of the world’s plankton with toxic chemicals since the 1950s, then we would not have had global climate change.

NASA’s satellite imaging states that the mass of phytoplankton plants has been reducing by one per cent year on year over the last 20 years.

Every fish, shrimp and living organism in the oceans contain priority chemicals and one in 15 contain micro-plastic.

Priority chemicals are found in sunscreen and over 4,000 different cosmetics and personal care products.

Europe makes 200,000 tons of these priority chemicals every year, including 30,000 tons of organic tin compounds. One thousand tons in solution would kill all life in the oceans.

Over 10,000 tons of sunscreen gets dumped on corals each year. At 62 parts per trillion, it is highly toxic to coral and plankton, while a 100g tube of toothpaste containing 0.5 per cent triclosan would kill all plankton life in a volume the size of 50 Olympic swimming pools.