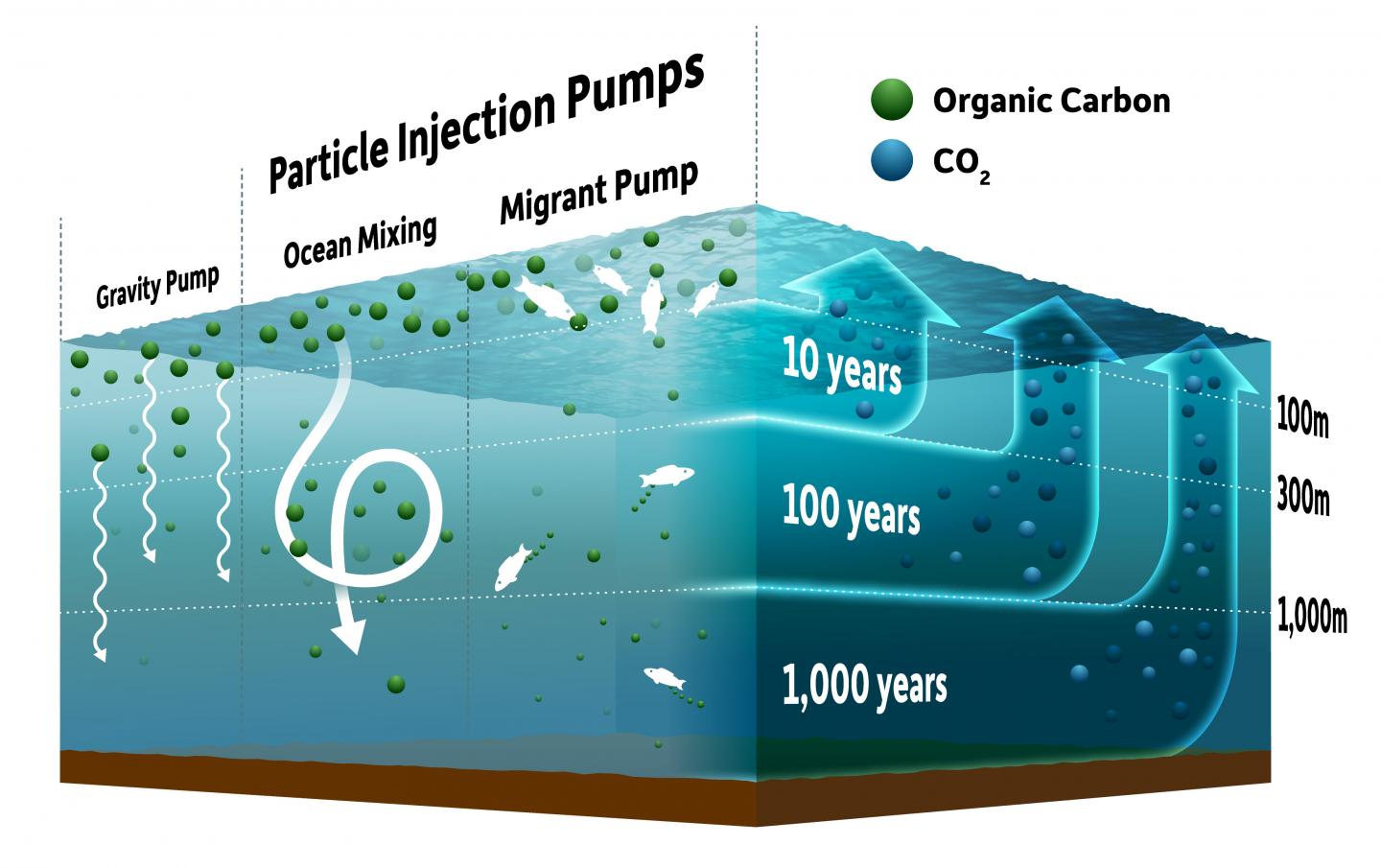 IMAGE: EARTH'S OCEANS NATURALLY PULL CARBON FROM THE ATMOSPHERE AND STORE IT DEEP WITHIN THE OCEAN WATERS. THE DEEPER A PARTICLE SINKS, THE BETTER, BECAUSE THE CARBON WILL TAKE A LONGER... view more

Earth's oceans have a remarkable natural ability to pull carbon from the atmosphere and store it deep within the ocean waters, exerting an important control on the global climate.

A large portion of the carbon dioxide emitted when humans burn fossil fuels, for instance, is taken up and stored in the ocean via a set of processes that make up the ocean carbon cycle. But, the rapid rate at which carbon dioxide emissions are increasing means the future of the cycle is uncertain, especially when many of the key processes remain poorly understood. In a new paper in the journal Nature, Tom Weber, an assistant professor of Earth and environmental sciences at Rochester, and his colleagues, outlined and quantified critical mechanisms involved in the ocean carbon cycle, specifically the "biological pump." Their new insights can be used to guide climate computer models to better predict the effects of climate change on a warming world.

SINKING DEEPER INTO THE OCEAN

The deeper into the ocean a particle sinks, the longer it will take the carbon to return to the surface and back into the atmosphere. Carbon released at depths of a few hundred meters, for example, is circulated back to the atmosphere on timescales of 10 years or less, but if particles sink into the deep ocean--deeper than 1,000 meters--their carbon can be stored for up to 1,000 years before returning to the surface.

Researchers previously believed the transfer of particles from the surface to the deep ocean occurred simply through sinking under the force of gravity--what Weber and his colleagues deem the "biological gravitational pump." However, in the last few years, scientists have recognized other processes that are important in transferring carbon from surface waters to the deep ocean. As outlined in the paper, these include the physical mixing of the ocean by the wind, by large-scale ocean currents, and by biological transport via animals such as small fish that eat the biomass particles at the surface and excrete them at depth. The researchers refer to these processes collectively as "particle injection pumps" (PIPs) because they can "inject" particles to much deeper depths--relative to mere gravitational settling--before decomposition occurs and the carbon is released.

"It's a much more efficient way of pulling carbon from the surface into the deep waters," Weber says.

Weber and his colleagues combined observational evidence and new model calculations to quantify for the first time how much carbon is transferred by the PIPs. They found that PIPs are a much more influential factor than previously thought: collectively, they are responsible for as much carbon storage in the ocean as the biological gravitational pump.

Because the ocean carbon cycle is affected by environmental changes in light, temperature, and nutrient availability, the researchers can use their new results to improve climate models and better forecast how the ocean carbon cycle will respond to future global climate change, Weber says. "If we want to have some predictive power with respect to the biological pump, we need to understand all the mechanisms and equip our global climate models with a complete representation."

The ocean carbon cycle is most notably affected by climate change because of warming ocean waters. The deep ocean is filled with cold, dense, and nutrient-rich water while the surface ocean is warmer and lighter. In order to maintain biological productivity, wind stirs the ocean waters, mixing them to bring the nutrient-rich water up to the surface. When ocean temperatures rise due to climate change, however, the density difference between the water in the surface ocean and the water in the deep ocean increases, making it harder for the ocean to mix, Weber says. "Satellite records show the overall productivity of the surface ocean is declining because the stirring of nutrients is becoming less efficient."

Weber's new research adds another "wrinkle to the problem," he says. Previous views of the biological pump indicated that a reduced ocean mixing rate would slow down productivity but "not really affect other processes in the biological pump: once you produce the particles, gravity alone would make them sink and decompose." The new view, however, indicates that a slow-down in mixing will also diminish the PIPs, which are vital to the ocean carbon cycle as "very efficient export mechanisms that get the particles nice and deep where the carbon can be stored longer," Weber says.